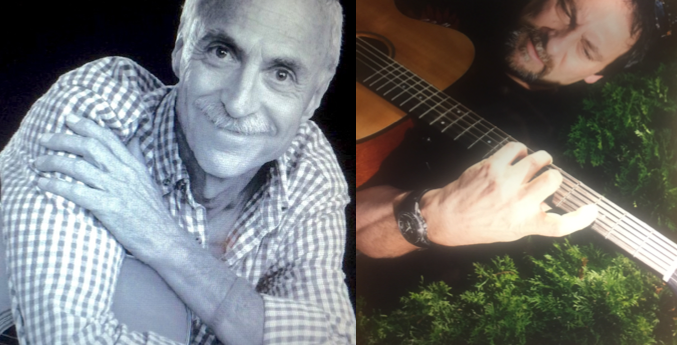 Jerry Ames. Singer/ Songwriter from the Bay Area now in the PNW. Performing originals and covers from the blues, jazz and fingerpicking genres. Toured and recorded with the Spiral Starecase in the 70’s (More Today than Yesterday), Jerry has had several original songs covered and recorded.  Winner of Seattle radio station KEZX songwriting contest.

Bobby Hines grew up in Palo Alto CA in the 60s which was a good time for music. “I got my first guitar when I was 11 and took four lessons. I believe the teacher wanted me to learn fingerpicking so we started out on a song called Freight Train. After four lessons I remember coming home with the the books and continuing to study on my own. Falling in love with  Beatles music I soon wanted my own electric guitar and four of my classmates to form my first band. First gig I can remember playing was in fifth grade at a talent show in the auditorium.  Later on in seventh grade I would play at the high school for  Sock Hop. I was introduced to jazz by a very good friend who played much better than I did. He introduced me to players like Joe Pass, West Montgomery, Grant Green, and of course George Benson. I spent many days playing as his rhythm guitar player learning  jazz standards and pop songs. Fast forward a few years, and I’m playing  different places and up and down the West Coast,  with a friend who played keyboards.

Anyway living in Portland I played with numerous bands , And I put out my first CD in 1995 called “ Other Worlds Then Ours” And another CD in 2010 called 2 Many Dogs in the Alley. I moved to Vancouver  n 2004 and continued playing in a band called Too Wet to Plow before becoming a solo artist”