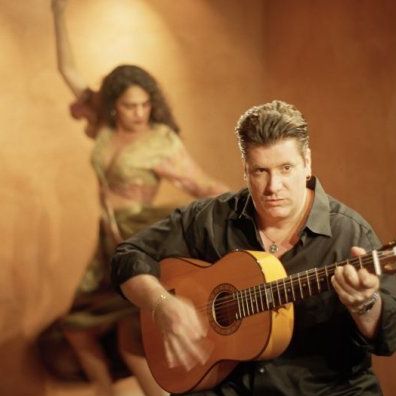 Tobáj is an international Latin/Jazz Singer, Guitarist, Songwriter and Recording Artist who lives in Portland, Oregon (USA). Tobáj has performed internationally in Spain, Mexico, Japan, Costa Rica, and the Caribbean – as well as on the West Coast, Hawaii and Alaska. He has also been featured on many radio and television programs in the U.S. and abroad.
Tobáj performs solo with guitar, with small jazz ensembles, and with larger jazz and Latin bands – including the 18-piece “Jazz Express Big Band” – doing many arrangements as performed by Frank Sinatra, Michael Bublé, Harry Connick Jr., and many others. His CD – self-titled, “Tobáj”, received a review in “Jazziz Magazine” that reads: “Tobáj (Tobáj Music) – The Portland- based singer/guitarist blends easy and romantic vocals in Spanish and English with spirited acoustic accompaniment that tackles numerous genres, from flamenco to samba. The smoldering seduction is broken up, joyously, y the Santana=like electric fire of “Sensacional.” Tobáj is also an accomplished “straight ahead standard-jazz” singer – specializing in vocal improvisation (“scat singing”).
Many have said, “A Latin Grammy waiting to happen.” When performing in the Portland area, Tobáj draws from a wide variety of some of the most accomplished and well-known jazz musicians in the Northwest. Many of these musicians are featured on his CD, such as Patrick Lamb (Sax), Jay “Bird” Koder (Electric Guitar), Jim Fischer (Keys and Piano), Sandin Wilson (Bass), Paul Mazzio (Trumpet and Flugelhorn), Toshi Onizuka (Flamenco Guitar), Caton Lyles (Percussion), Lori Presthus (Cello), and many more! Tobáj is an all-around entertainer who brings a high level of energy and professionalism to all his performances.