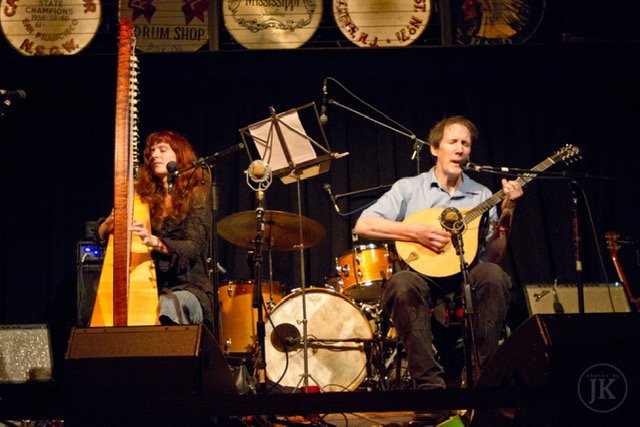 Irish harp, North Indian sarod, Greek bouzouki, Middle Eastern and African percussion, Irish and Appalachian fiddle, folk guitar and harmony vocals-no one has ever been able to reach a final tally on just how many instruments Elizabeth Nicholson and Bob Soper play’ or how many cultures influence their music. Duo partners for seventeen years, they also share the dual role of fronting the critically acclaimed international roots quintet Stringed Migration. Their music has been hailed as “performed with the sort of resonance that separates masters from neophytes” (Jerome Clark, rambles.net, 2009), and has been featured on NPR’s The Thistle and Shamrock, The Midnight Special, and hundreds of other radio programs worldwide.

Bob Soper is counted among Portland’s most astonishingly versatile multi-instrumentalists. A rock and jazz drummer from a young age who also studied classical Indian music at the Ali Akbar College, he went on to learn the Irish fiddle, ultimately becoming one the Northwest’s most sought after players. Also an accomplished guitarist, bouzouki player and vocalist, he’s been a member of some of the region’s most beloved and successful ensembles, including the Irish bands Cúl an Tí and Grafton Street, as well as the old-time/country-blues group The Pagan Jug Band.

Considered among the top American interpreters of Irish traditional music for harp, Elizabeth Nicholson’s harp studies have also included classical, Paraguayan, and medieval music, and she has stretched the traditional boundaries of the instrument into rock music and country blues. Her 2006 CD of traditional and original music, “Sink or Swim” was released to widespread critical praise and international airplay, and was chosen “Folk Album of the Month” on Iowa Public Radio.